It was 2013, I was 20 and fresh out of college. I just finished university and got a degree in Communication.

Suddenly, I felt like there were so many opportunities waiting for me out there in the real world and that I could anything I wanted. I was young and I was ready to take on the world, see more of it, go new places, but I was a broke, jobless new graduate and there was no way I could afford travelling.

So I thought of one thing many others have already thought about: becoming a flight attendant.

Now, fast forward to more than 5 years later, I still remember how this journey started for me. It wasn’t an easy one, but looking back now, it wasn’t entirely difficult either.

To put it simply, becoming an FA (Flight Attendant or Cabin Crew) didn’t just suddenly happen for me, I had to work for it, I had to earn it, and though training was absolutely not a piece of cake, it wasn’t impossible either.

It took about 6 months before I was released to fly. I know for some airlines, training lasts for a month or two, others a bit longer, but my training lasted for a bit over 5 months, and a few more weeks waiting for my license and papers to be released.

Before starting training, I’d already heard “horror stories” about it, about how hard it was, how difficult the exams and drills were, and how people actually failed training.

During training, I learned what it was really like being a flight attendant.

Admittedly, I thought there was no way it could be that hard. But training proved me otherwise.

I spent nights studying and studying, harder than I ever did my entire life. For my airline, the passing rate was 90%, and you only get to do 2 retakes out of the countless exams and drills you would have to do the entire training.

Basically, there was no room for error, and that made it so much stressful.

Looking back, I now know why it should be like that. When more than 300 people’s lives are on the line, we don’t get to take deep soothing breaths to calm our nerves, especially when we only have 90 seconds to save people’s lives. We have to make decisions under pressure, under much worse circumstances than our trainers shouting at our ears and breathing down our necks.

It was then that I realized that I wasn’t spending all this time and effort to learn how to serve passengers, I was actually being prepared should there come a day that I am the only one standing between a passenger and death.

As horrible as it might sound, that is the one truth about flight attendants that people often overlooked. That flight attendants are safety professionals, trained in all sorts of fields, to become your firefighter, your nurse, your police officers, up there at 40,000, should the need arise.

Training was all sorts of stress, but fun too. The people I spent training with for months not just became colleagues at work, but also friends.

Having such people around me with the same goals helped so much. Some nights we would all stay up, studying about Boeing 777s, exchanging notes and testing each other.

Training can be so intimidating, and yes, people fail all the time. Not everyone who passed the interviews passed the training.

It was definitely not a walk in the park for me, but taking on that challenge was one of the best decisions I ever made in my life.

There is no “winging it” when training to get your wings. It needs determination and a lot of hard work.

There would be days when the pressure would just get to you and you would feel like you’re not good enough, your self-esteem going down the drain, but you would have no choice but to pick it back up, because that’s what training is for.

It is learning how to stand back up while everything crashes around you. That’s what flight attendants do.

And rest assured, come graduation day, you will come out like a polished diamond, fancy and glamorous, tough and unbreakable. Just like your flight attendants. 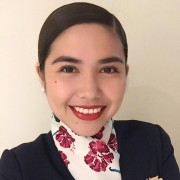 She’s just a small-town girl, travelling the world as an international flight attendant, gatecrashing the world, one city at a time. Currently enjoying life as a tourist in each layover, and as a travel and lifestyle blogger. See and hear more from Jonalee on her blog ‘Chasing Dreams and Catching Flights’ connect on Instagram or subscribe to her YouTube channel!

How to get started on your new career and life….and not just for January!

How to get started on your new career and life….and not just for January! Bought by Eloise from United Kingdom (UK)
about 18 hours ago

Bought by Sandy from United States (US)
about 2 weeks ago

Bought by Cheryl from United Kingdom (UK)
about 3 weeks ago