Every airline around the world has one thing in common – the need for customer service experience!

The mechanics of the job are not hard, serving food and drinks, smiling at people, all the day to day things, these can all be trained.

But experience of dealing with people can only be learnt over time and some people are better at it than others.

One day you can be dealing with families heading off on their annual holiday, students travelling for their back packing year, business travellers who fly almost as much as we do or Hollywood A listers and CEOs of multinational companies.

Each of these groups, and many others, have their own unique set of needs and it is vital to know how to deal with this.

My own customer service experience has been varied, and even now after many years of work I am still learning on a daily basis. I think I’ve heard it all, but then I’ll get asked something new.

And to the person asking –  however stupid you may think the question, it’s not stupid at all!

I spent 10 years working for the Police as a civilian, within a variety of roles. Dealing with incoming calls from the public who had been victims of crime (or not as the case sometimes was!), working in a unit where I interviewed people who had been arrested and then prepared all the files for court, and finally in a unit were we investigated Fatal Road Traffic Collisions.

In those 10 years I dealt with a myriad of different people, most of whom were stressed, upset, confused, scared, emotional, angry etc. Exactly the same emotions many people are experiencing when flying.

I have also spent a number of years working in Sales. Most airlines will have some form of onboard sales such as duty free, meals or drinks. Some sell scratch cards or even upsell upgrades once on the aircraft!

Sales is an art. I’m sure we’ve all experienced being in a shop where there’s a pushy sales person. It’s the worst feeling ever. Imagine that in a metal tube at 38,000 feet!

I’ve also worked in a pub alongside the other jobs I’ve done. In some ways I think I’ve learned more about human nature doing this, than in anything else I’ve done! People, once they’ve had a couple of drinks, can become totally different and often don’t respond in a ‘normal’ manner.

Personally I just love everyone after a few glasses of wine, but others can become aggressive and confrontational, and yes that happens on the aircraft as well – as much as we try to moderate peoples drinking.

What you can do…

Prior to applying to any airline, it’s so important to gain as much experience as you can in as many different types of situation as you can. Working in a pub, a café, a store, a leisure centre, even a charity shop!

Anywhere you can interact with the public!

It sounds strange but note down any examples where you have gone out of your way to help someone or worked in a team in a difficult situation. These are the kind of examples that airlines will ask for during the application process, especially in the interview.

It is so important that you can show that you can adapt to different situations, remain calm under pressure and evidence these as examples on an application form or during an interview.

You want to stand out from other candidates (in a good way!) and let the

airline see what a great crew member you would be for them.

You can also gain experience through doing relevant courses or volunteer work.

The end results are so worth it, I’m currently writing this article on Sunday afternoon in a hotel room in New Jersey with the most stunning views of Manhattan. 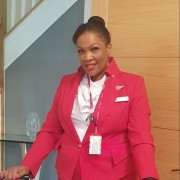 Bought by Paige from United Kingdom (UK)
about 3 days ago

Bought by Sophie from United Kingdom (UK)
about 6 days ago

Bought by Heather from United Kingdom (UK)
about 2 weeks ago

Bought by Charlotte from United Kingdom (UK)
about 3 weeks ago