There’s a woman flying the plane and men serving the tea and coffee. Whatever next”, an actual statement I overhead an elderly couple saying as they boarded my aircraft.

Why do some people, even today, see the role of cabin crew to be effeminate?

To understand this rather dated mentality, we need to go back to the beginning.

The worlds very first flight attendant, Henrich Kubis, took to the skies in 1912, tending to passengers aboard the German Zeppelins.

Originally known as ‘stewards’, these men were carried for safety related duties including loading luggage, fuelling, dealing with technical issues, assisting pilots to push the aircraft into hangars and rowing the travelling elite to shore from the sea-planes in use at the time.

The job was seen to be very masculine.

Indeed, Pan Am and Eastern Airlines in the US and Imperial Airways of the UK, portrayed their male crew to be sexually desirable fashion-icons in advertising campaigns and their military style uniforms.

Then came Ellen Church, hired by Boeing Air Transport (later United Airlines) in 1930. Church, was a former nurse and her employment was a resounding success.

During the war years, as men went off to fight, more airlines began to review their ‘men-only’ policies and more ‘sky-girls’, as Boeing Air Transport referred to them, began to appear on board.

Today Church is often hailed as Americas first ever flight attendant, virtually erasing Sanchez’s legacy. His omission from the history books is telling of both the social and historical view of male flight attendants, even today.

Flight attendants now had to provide meal services, mix cocktails and tend to their every whim, all with an air of charm and class. To the public, these duties made the role appear more feminine than that of the pre-war stewards.

Financially, the post-war years were a difficult time for airlines. Stewards began fighting for their rights of employment and, as the role became more unionised, many carriers looked at ways to keep costs down.

The war-time employment of ‘sky-girls’ highlighted they could be paid significantly less than their male counter-parts; this at a time where a woman was seen as a second class citizen.

Wages could be kept low and by introducing strict weight and age restrictions, (plus a no marriage policy) turnover was high, ensuring most girls were forced out before they gained any seniority.

Being cabin crew during the financially turbulent post-war years brought with it a lot of challenges – especially for men.

Culturally, the image of the male steward was in decline.

Airlines began to poke fun at their male employees, all with homophobic undertones.

Although only a cartoon, stewards had to endure the same mocking and ridicule as their comic-book counter part. The Washington Post went on to refer to stewards as ‘Male hostesses’ making them seem effeminate and were frequently suspected of being gay.

Gone was the masculine imagery of buff stewards in their white military uniforms, replaced by the caring and domesticated stewardess.

In 1949 Delta Airlines ceased hiring men, and Eastern followed suit during the early 1950’s by simply eliminating the role of purser. By 1958 Pan Am too had stopped hiring men.

During the 1960s the role of Cabin Crew was predominantly all female, all white and all young. Airlines began making their female crew objects of desire for the high paying business passengers.

The small group of male stewards that did remain tended to be very senior and very well paid, hired during the earlier decades.

But times were changing and in 1964 when the Civil Rights Act was passed, airlines were forced to rethink their ‘no male’ policies once again.

As the aviation industry entered the 1970’s, airlines around the world began to hire more men and as the decade progressed, this new gender balance meant that the sexual image of the stewardess had to be played down. This was highlighted by the return of more conservative uniforms.

Today in the western world it’s the norm to have male cabin crew onboard. But in the Far East many airlines still only hire female crew.

In June 2018 Japanese carrier Star Flyer organised an all male flight in order to gain recognition for male cabin crew in Japan. Of its 150 or so flight attendants, only nine, or 6 percent, are men.

Times are changing. Around the world airlines are hiring more male cabin crew and the stereotypical image of the ‘gay flight attendant’ is slowly fading.

Being cabin crew is one of the greatest jobs in the world and regardless of gender, race or sexuality if it is your dream, you should follow it. 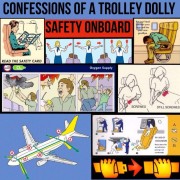 Dan Air’ is the creator of confessionsofatrolleydolly.com “Take a peek behind the galley curtain for all your cabin crew and aviation news, gossip and hilarious tales of life as a trolley dolly, as we attempt to bring the glamour back to 39,000 feet!"

Uncovered- the all NEW airline interviews